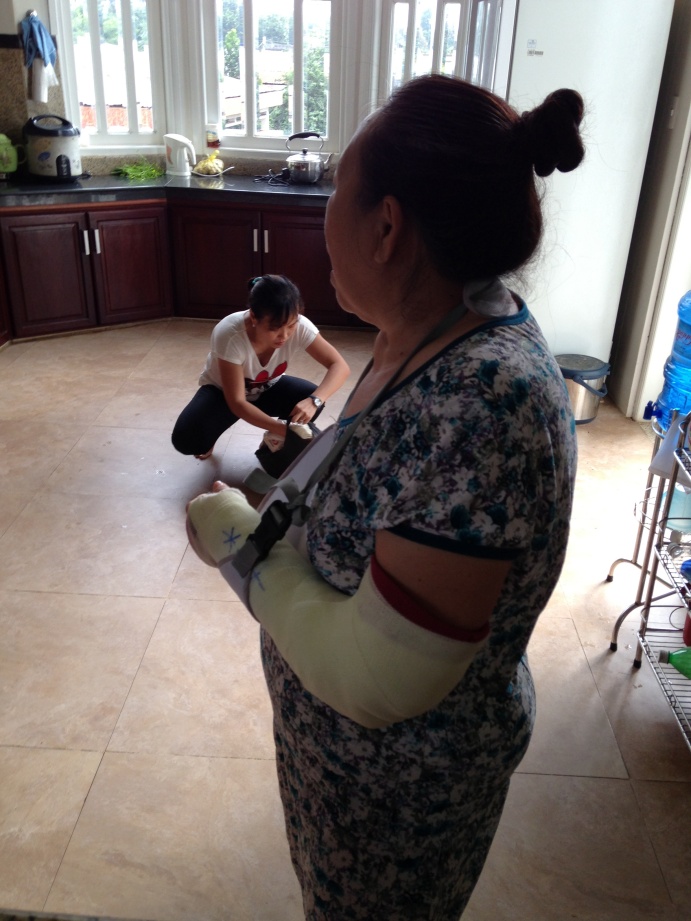 Not intentionally of course, but from what I remember of my law school torts class I’d be liable under theories of negligence and proximate cause or something like that. I have these really crappy $3 black flip flops that I bought from Target ages ago, which are my beach flip flops. I usually hide them under other shoes on a shoe rack in the garage. If you leave flip flops lying around and easily accessible, they become communal flip flops and anyone who wants to wear them will. I have a thing about other people wearing my shoes and the tread on these particular flip flops has completely worn away, making them treacherous on any wet surfaces, so I take care to hide all my footwear in the garage or in our bedroom.

After dinner last night, Tom had a hunkering for a VN roast pork sandwich sold from a cart about a block down the street. I was too lazy to run upstairs to grab real shoes so I fished out my crappy black flip flops from the shoe rack. Both kids had burst into tears of anguish at the thought of being separated from me for three minutes, so I took a kid in each hand and headed outside. At exactly that moment it began to rain and I almost slipped before we had descended the marble stairway in front of the mansion. I hesitated, thinking this was a bad idea because I was either going to break my neck or one of my kids’ necks, and started to turn back. My kids tugged on my arms as they reassured me, “Mom, it’s going to be okay. We’ll be alright.” I don’t know why but I was reassured and decided to go for it. We made our way down the stairs ever so slowly and carefully walked to the sandwich cart and back. As we took off our shoes at the front door, I made a split second decision to leave my flip flops outside overnight to dry.

The next morning I woke to gray skies and drizzling wetness. When I walked into the kitchen, Tom was grim-faced. “Auntie broke her arm this morning. She’s so sad, she looks like she’s about to cry.” I walked over to my poor aunt, who indeed looked like she was on the verge of tears, and expressed my sympathy and dismay. She had slipped on the front stairs and fractured a wrist bone when she cushioned her fall by landing on her left hand. The lightbulb did not go off in my head until one of the cousins came up behind me while I was washing dishes and admonished me to throw away my flip flops. “If it hadn’t been Auntie it could have been you!” Oh shit! It hadn’t occurred to me that she fell because she was wearing my treacherously crappy flip flops but in hindsight it seems so obvious and 100% predictable. By leaving my worn flip flops at the entrance on a rainy night, I had practically guaranteed that someone would slip and fall. I approached my aunt again as she was being comforted by her children and explained that I never left those particular flip flops out, I always hid them in the garage because I knew how slippery they were, and it was bad luck that I happened to run out to buy roast pork sandwiches the night before, the first time I had ever done so. “So those were your slippers?” she asked mournfully. I was crushed. Up until this point, I took comfort in the belief that my presence, while not particularly beneficial to anyone, wasn’t doing any harm. Now here was affirmative proof that I was no good. My aunt was going to have a cast and lose the use of one of her arms for months because I had been foolishly thoughtless. I felt so badly for her and for myself that tears welled up and I had to run up to our bedroom to sob inconsolably for a few minutes. I later went back to my aunt and apologized for being so careless and she shook her head while patting my arm, “No child, it wasn’t your fault. No child, no.” She’s such a sweet, gentle soul that tears threatened to well up again but I was grateful and relieved to hear that she didn’t blame me. After all, it was Tom who wanted the roast pork sandwich.

A former corporate attorney who is now happily retired and does whatever she wants. View all posts by emphan