We screwed it up royally. And it’s a shame because we had all the ingredients to have a really great night. Originally my mom had planned to return from Germany on January 2nd, but as a favor to us she returned on New Years Eve to watch the kids so we could go out that night. We made a reservation at a nearby brasserie/bar that had festive decorations and promised to have a DJ for its NYE entertainment. Our late dinner started with some delicious foie gras pâté and a dozen raw oysters, followed by lots of red meat: steak frites for Tom and beef tartare for me, all accompanied by plenty of wine. Dessert was a trio of crème brûlée with coffee. Shortly before midnight, the DJ set up his equipment right next to our table and the new year was ushered in with happy revelers dancing to pulsating music. Too bad we were fighting the entire time. It had started that morning, when Tom made an unkind remark to me. Apparently he didn’t think it was a big deal, certainly nothing warranting an apology, so I was left to fume all day as I waited for him to approach me. It wasn’t until we were on our way to the restaurant that we really started bickering, about parenting, negativity, passive-aggressiveness, defensiveness, being rude and inconsiderate toward your spouse; all standard, mundane stuff.

Tom is the most non-confrontational person in the world. His desire to avoid conflict is matched only by my stubbornness. He didn’t think we needed to openly address and resolve our issues because he was no doubt hoping that once I had a few drinks in me and was sufficiently buzzed, coupled with the fact that it was NYE, I would be willing to set aside any grievances and just enjoy the night. Stupid, stupid man. It’s really hard for me to pretend to be happy when I’m not, and with my husband it’s impossible for me to pretend at all.

Our tiny table was sandwiched in between the tiny tables of two other couples, and I bet no one expected that I would be loudly berating the shellshocked-looking man sitting across from me for a good portion of the night, least of all the shellshocked-looking man sitting across from me. If Tom thought that I wouldn’t fight with him in public, within hearing of other couples sitting on both sides of us, on New Years Eve, then he was dead wrong. I was never going to see these people again in my life, what did I care? I got really worked up and emotional and a couple of times had to dab my eyes, at which point Tom tried to change the subject by telling me a really boring story about his shaving experience, which story was not well-received.

When I get myself worked up into a rage, it takes me forever to get over it, even if I really want to. I didn’t want to be fighting with my husband at a restaurant in Paris on New Years Eve. I was mad at both of us for not resolving our stupid fight earlier. Very often, the thoughts in my head are at odds with the words that come out of my mouth. I say really spiteful things when I’m angry. In my head, I kept telling myself to just let it go and try to salvage the night. It’s New Years! A fresh start! Time to forgive and let bygones be bygones and appreciate your loved ones and all that crap. So when Tom asked if I had any reflections about the past year, in my head I thought about saying, “I’m really grateful to have had this sabbatical from work which allowed me to travel and spend time with my family,” but instead the words that came out were, “You ruined my day AND my night AND my entire year, and you’ll probably ruin the rest of my life!” When he had asked for a truce earlier in the night, instead of conceding I heard myself say, “I HATE YOU!! I HATE YOU SO MUCH!!!”

My heart holds onto anger with pitbullish tenacity, even when I know I’ll regret it later. I just can’t stop myself from feeling the way I’m feeling. It has to run its course and go away on its own, usually only after exhaustive scrutiny and analysis. I need to dissect and discuss every issue ad nauseam, evaluate it from every angle. I need points and counterpoints, proof, objectives, and resolution. Tom just wants to move on. He would be perfectly happy if we never discussed a single point of contention and all disagreements were resolved with blowjobs. But fights are never about a single issue or a single point of contention. There’s history and baggage and the evolution of a relationship, of a marriage. I wasn’t thinking only of his unkind remark from that morning. I was thinking, how did we get here? I remember we once went out to dinner while I was in law school, and a middle-aged couple seated near us at the restaurant kept looking in our direction. Finally the woman leaned over to us and said, “My husband and I have been trying to see your fingers, because we were trying to figure out if you were engaged or newlyweds. You look so happy and in love.” I smiled, rather smugly I think, because at the time we had been married for five years, and I was confident that we would always be madly in love with each other. I thought that my husband was incapable of being mean to me, and the euphoric stage of our relationship would last forever. I thought that we were better than other couples, and the way we felt about each other was special. Now, I’m confronted with the reality that we’re just like everybody else. We have the same arguments as everyone else. We play the same hackneyed gender roles that countless husbands and wives have played before us. There is nothing special or unique about us. How did we get here? How does any relationship get here, especially when you vow at the beginning of it, that you’ll never turn into one of those couples? How do you go from always sitting next to each other at restaurants because you want to hold hands and smooch while you’re eating, to staring blankly at each other from across the table because you’ve run out of things to talk about? How do you go from having sex twice a day, to twice a week, to twice a month, to only on special occasions? How do you go from not being able to keep your hands off of each other, to forgetting to touch each other at all? How do you go from hours of googly-eyed exchanges, to thinking that everything your spouse says is stupid and annoying, or tuning them out and not even bothering to listen? How does marriage go from being completely effortless to something that requires attention and work? I’m not saying that I want us to regress into lovesick puppies. I just don’t want us to be like pieces of furniture to each other. Even if that’s what happens to other couples, even if it’s the natural, inevitable course of relationships. Making a snide remark or being not-so-nice to your spouse once in a while is not shocking, unnatural, or outrageous behavior. It’s normal. My husband isn’t a bad person or a bad husband. He just acts like a guy who’s been married for 14 years. But if I’m okay with that, then in a few years he’ll act like a guy who’s been married for 18 years. And so on and so forth, until we’re like pieces of furniture to each other. It’s easy to not let him get away with it, to adopt a zero tolerance policy toward anyone who doesn’t treat me the way I want to be treated. The tricky part is being able to get over myself in time to not ruin everything and to be able to answer honestly when I ask myself, am I always as nice to him as I want and expect him to be toward me?

The new year itself was very anti-climatic when it arrived. Tom and I were sitting across from each other in silence, looking around and occasionally glancing at a large clock on the wall that we later learned was running slow. Around what we thought was five minutes before midnight, people at the bar started hollering and whooping and whistling and I pulled out my phone to find out that it had already turned midnight. We looked at each other and then he came over to sit next to me, put his arm around my shoulders and kissed me on the cheek. I knew I was supposed to turn my head and kiss him — that’s what I should have done — but I simply could not bring myself to do it. I was too hurt and angry to kiss my husband on New Years Eve. It was the first time since I started kissing that I didn’t kiss anyone at the beginning of a new year.

I saw young couples embracing each other, older couples locked in passionate kisses, friends wishing each other happiness and health. A few times some revelers tried to draw us out of our shells by shaking hands or encouraging us to dance, but for the most part we were bystanders observing the merriment around us without participating in it. I can only imagine what onlookers must have thought about us: the uncomfortable-looking man sitting next to his scowling companion, the unhappy couple. We’ve never celebrated New Years in a foreign country before, and we’ll likely never do so again in Paris. We (I) really fucked it up. 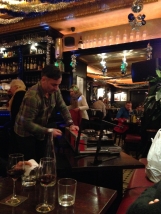 DJ setting up next to us. 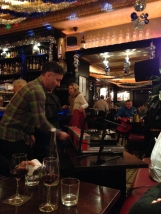 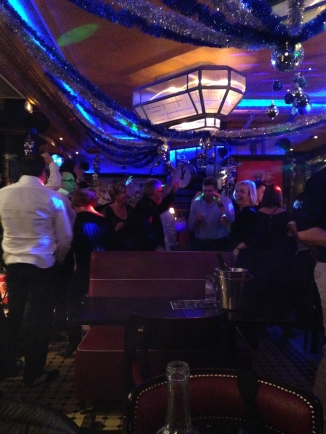 Everyone is partying happily except us

A former corporate attorney who is now happily retired and does whatever she wants. View all posts by emphan